There is widespread applause and expectation at this announcement which will impact carriers, brokers, MGAs, TPAs and repair networks.

Not least because it is not just the potential to offer better value products and value to policyholders but it also shakes up the business operation which swallows most of an insurer's money- claims.

Metromile is not just a "“a data science company, focused on auto insurance.”  Metromile Enterprise claims to deliver an enterprise strength digital claims platform that is far more than just automation, eFNOL and straight-through-processing. It also augments claims adjusters, supply chain teams, fraud teams to manage the complex long-tail claims including personal injury, subrogation, property damage- the "Full Monty" in fact. Including home and contents the current core of Lemonade.

CEO Daniel Schreiber describes the competitive advantage the combined companies offer and the reason why Metromile & Lemonade fit so well.

"In recent years we looked at some 30 opportunities to acquire companies. Some were competitors, others complementors, and many had teams, products, technologies, or territories that we covet. We passed on them all.

While we are open to M&A, we will only proceed if we believe the deal will preserve our single culture, single tech stack, single brand, unified team, and unified product line. It’s a tall order, and Metromile is the first company with whom we believe we can achieve such a union."

And the competitive differentiation?

While Metromile may not be celebrated for its growth, those in the know recognize its primacy at harnessing telematics and data science to match rate to risk. The extent of this mastery became clear to us once we got a good look under the hood, though Covid-19 provided the industry with a glimpse too.

During 2020 auto insurance loss ratios were unusually volatile, as driving patterns changed dramatically, while premiums changed not at all. In California, Metromile’s largest market, regulators eventually calculated that auto insurers owe their customers a 17% refund for this mismatch. Tellingly, Metromile’s system, in real time, had automatically charged their customers 16.2% less during that period.

As Warren Buffett said, “only when the tide goes out do you discover who’s been swimming naked.”

And back to claims, efficiency and achieving ascendancy in the competitive auto insurance market.

Many auto insurers do not make money from the core product but rather from the high margin add-ons like premium finance. They are vulnerable to this combination  of Lemonade and Metromile being both profitable, efficient and customer obsessed. Tellingly Lemonade aims to offer policy holders compelling insurance for home owners and renters, pet and now auto.

Nigel Walsh offers sharp observations and insights and his latest on this planned acquisition is on the nail.

"I only reminded folks today at a conference of the old Alastair (Alex) Rampell quote - will Startups get distribution, before Incumbents get Innovation. I think this sends a huge message to the industry. Not only is auto tough, but there's always opportunity and if it means coming together to go after, then.....

Equally Patrick Kelahan always offers sound advice and his on this planned venture is:

"As I commented elsewhere- having just the ingredients to make a cake does not make one a baker."

There are many good bakers and ingredients for incumbent auto insurers to go together with.

Verisk, LexisNexis, Mitchell, CCC, RightIndem, Tractable, Solera-Audatex, Genesys to name just a few. And some interesting combinations as well like Verisk's strategic investment and partnership with HUGHUB for a Quote & Bind to Claims Settlement platform.

The US auto insurance market is complex with each State by state licensing requirements. Different again in Europe, China and Asia and the great under-served markets in Africa.

In the UK Adiona has the same ambitions and plans as Lemonade to challenge incumbent auto insurers partnering with Trak8, Duck Creek and World Programming for a similar data science backed technology platform delivering the cover and value customers want more efficiently. Across Europe other insurtechs are targeting this market.

Lemonade-Metromile and all of these other innovators must catalyse insurance CEO's and C-Suites to anticipate the increased velocity of change - both new technologies, new demands and behaviour of younger customers and competition. It is not beyond the bounds that an incumbent could acquire the new entity.

In parallel auto OEMs will monetise data and telematics from their vehicle stacks to embed insurance and claims services to potentially erode auto insurer premiums and profits. As vehicle technology stacks advance from ADAS Levels 2/3 to 4 and fully autonomous Level 5 the pivot to product liability rather than driver cover is another trend.

As our discussions progressed, it became evident that the alignment runs deeper: Our companies enjoy a near-perfect overlap of vision and culture—yet have almost zero overlap in products and licenses. Those are the building blocks of a rewarding union. Then, of course, there were Metromile’s 49 state licenses, over $100 million of seasoned in-force premium (IFP), and over $250 million of total cash. All manifestly valuable to Lemonade. Yet, what made this deal truly strategic is best captured by how Metromile describes itself: “a data science company, focused on auto insurance.” 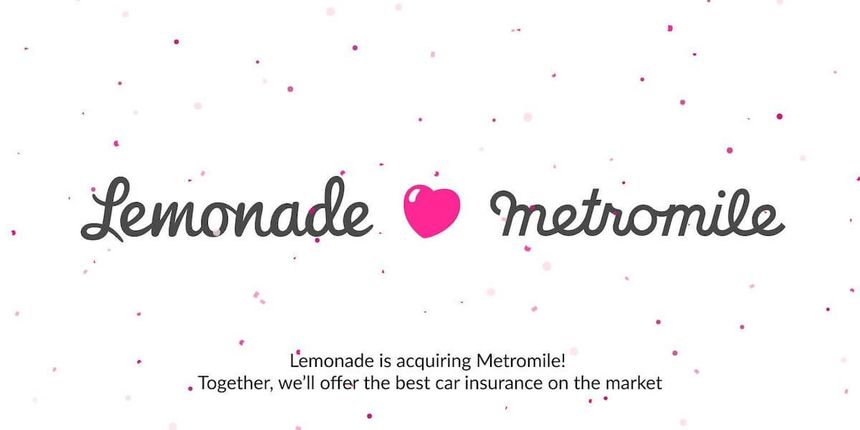 I'm rarely excited when one of the companies I'm invested into acquires another one. But as soon as Lemonade launched its Lemonade Car product I wondered how will they accelerate data collection?
Metromile is the answer and I'm so…https://t.co/7o9jrxlnvR https://t.co/ednHB4CULk

Congrats @daschreiber, @shai_wininger, Dan Preston and all the teams at Lemonade and Metromile. I only reminded folks today at a conference of the old @arampell quote - will Startups get distribution, before Incumbents get Innovat…https://t.co/KBHsVuK4wA https://t.co/ZCulIFRkfz

Today's deal leapfrogs us over the riskiest part of our car ambitions: growing Lemonade Car before our data models season. It collapses time, flattens risk, and increases our efficiency, unlocking tremendous value for our shareholders and customers. See: https://t.co/NQqeXnzhDS