It is not just some full-stack and technology provider insurtechs that have fallen victim to plunging valuations. And before anyone thinks this is all doom and groom the story is as old as the hills. It probably takes a 100 start-ups to create 10 successful ones. The other 90 are either bought up on the cheap by existing companies or die away. Sky high valuations in the early hype stages are not unusual whilst in he longer term common sense comes to the fore.

"In May, Uber chief executive Dara Khosrowshahi, sent a company-wide memo explaining the game had changed. Growth for growth’s sake was out, he said: “We have to make sure our unit economics work before we go big”. This is proving to have been a watershed moment. “Unit economics” is becoming an albatross around the necks of tech-adjacent businesses that listed on public markets in recent years. Investor darlings such as Coinbase, Peloton, Stitch Fix, Redfin, Compass and Carvana have announced significant redundancies."

"Just over five years ago, the insurance industry entered the crosshairs of the tech world. Despite serving as the backbone of global growth, insurance lagged the pace of technology adoption enjoyed by other industries. https://lnkd.in/e3rpJqkM
Entrepreneurs saw this as an opportunity to disrupt incumbents, and soon there were lofty claims that everything about the industry was about to change. With tech’s embrace, people were about to soon “love their insurance!” Venture capitalists noticed, and startups closed large rounds of capital.
Fast-forward to today, and it’s safe to say that none of us have found an intimate connection with our insurers. That said, the industry is in a transformational moment as it races to keep pace with technology.
Many like to refute the underlying disruption by pointing to public valuations of insurtech firms, some of which are down as much as 85%-90%. But we are experiencing a typical phenomenon that occurs in industries transformed by technology: Early challengers often lack appreciation for the complexities of the market and sometimes overpromise short-term visions.
Now, a new crop of challengers is learning from their predecessors’ mistakes. As we enter “insurtech 2.0,” the lessons learned are becoming the new best practices, and nowhere is this more evident than at the startups building an MGA (a managing general agent)."

Ostensibly, the beauty of technology businesses is their economies of scale. Revenues should keep trending upward with only little marginal extra cost. Too many tech-adjacent businesses lifted top line growth merely by adding expensively-incentivised sales and marketing staff. With capital so abundant, growth-oriented investors had pushed them to expand, expecting profits to materialise following the land grab.

There will, of course, be insurtechs that have balanced ambitious growth with a firm handle on the economics of go-to-market and financial control. ManyPets, wefox, ZEGO are to my mind in that category though they may not have the harsh spotlight of analysts attention like those that have to publish financial accounts e.g. Lemonade, Root and Hippo who managed to cross the chasm and build up the number of customers. Then they hit the reality of cost of acquisition rising faster than GWP, operational costs rising similarly e.g. as they move beyond simple claims like accidental damages to the complex, long-tail claims that come with auto insurance

Time will tell which ones get it right but remember how long it took Amazon to establish its business model and all the while suffer eye-watering losses. Even now its valuation multiple has fallen significantly as the boost to online shopping caused by the pandemic has started to reverse as shoppers once again enjoy the instore experience at the same time as Amazon's $61billion investment in expanding logistical capacity must be paid for.

The same lessons must be applied to the insurtechs whose mission is to technologically partner with insurers, brokers and MGAs to deliver the transformational outcomes vital to survive and grow.

This is not a new phenomena - Geoffrey Moore in his seminal book "Crossing the Chasm" described how many start-ups will secure an early customer, even a major one with high revenues, that is willing to experiment and put resources into creating with the start-up a product from point software solutions to platforms. These innovators even win some of those insurers that are early adopters but then most cannot scale up and fall into the chasm below. 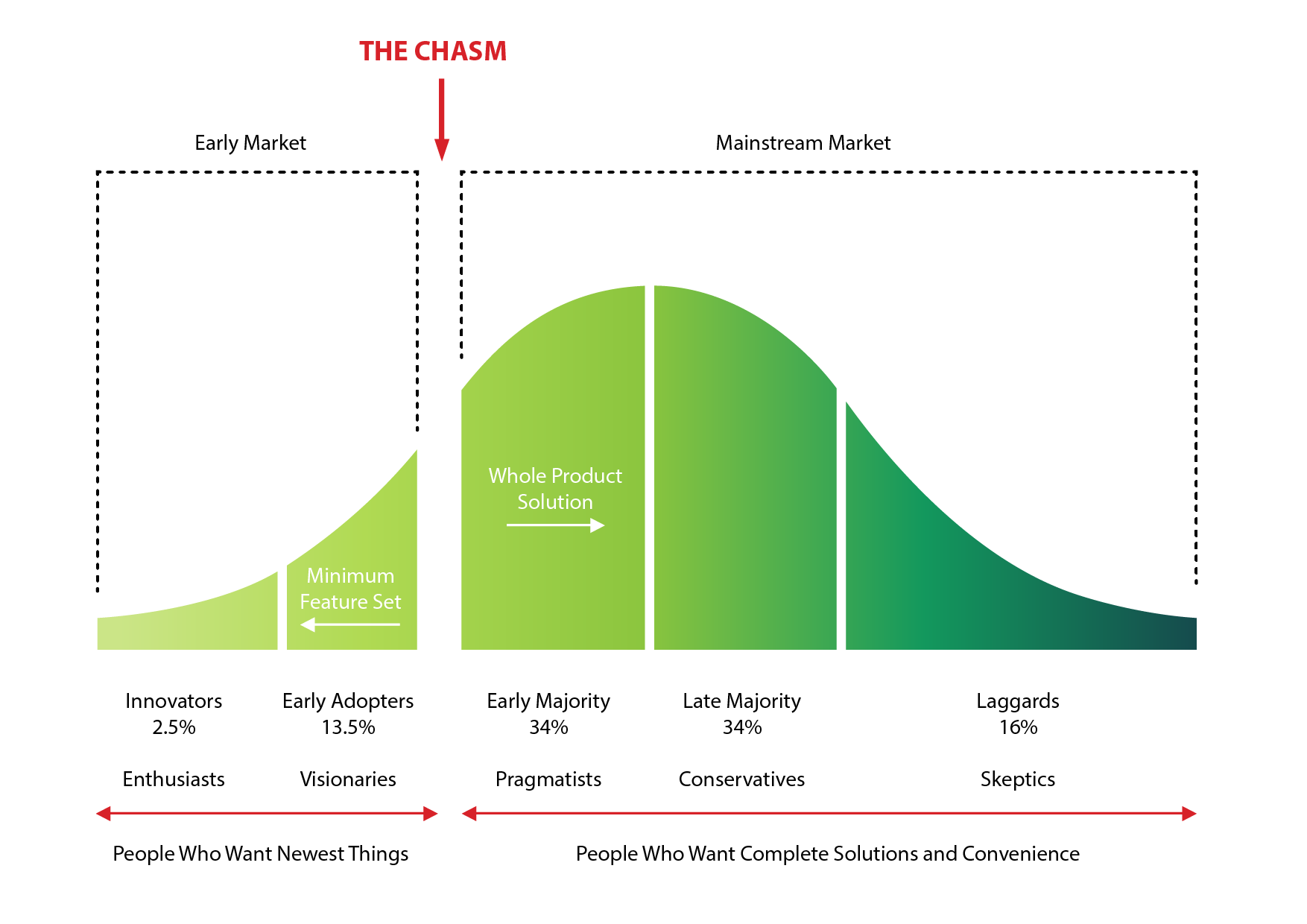 It takes time for these CoreTech, ClaimTech, FraudTech and other  **Tech to win one or two early adopter customers . Too many will try and build any functionality an early adopter asks resulting in "bloatware" that is at best nice to have rather than must-have. They will fall in the chasm.

Moore points out that the people who can manage a start-up and win early adopters are raeely the people who can cross the chasm and win a large number of early majority customers. So it's important to see if insurtechs have realised that and hired people of the right profile to build out and whole product solutions that win.

Others will focus on a viable product that solves real problems that cost insurers significant cost, lost opportunities and the threat of loosing current business. They cross the chasm, create a bridgehead in the early majority market which has held back whilst "early adopters" experiment and prove the viability of products and vendors . Now, two and three years later they make their move and start to buy.

Which providers have the vision, strategy, ability to deploy and iterate and cope with new customers i.e. prove scalable?

The gorillas in the market already deliver that; Guidewire, Duck Creek, Majesco, Verisk, CoreLogic etc.  Buyers must balance that "stability" with the relative complexity, slowness, high ticket price and lengthy time to deploy. Not to mention time and money consuming upgrades every three-five years.

Choosing the right technology partners is not an easy task; I have written at length about it in

It deserves a place in the top priorities for all insurers, brokers and MGAs

“Unit economics” is becoming an albatross around the necks of tech-adjacent businesses that listed on public markets in recent years. Investor darlings such as Coinbase, Peloton, Stitch Fix, Redfin, Compass and Carvana have announced significant redundancies. 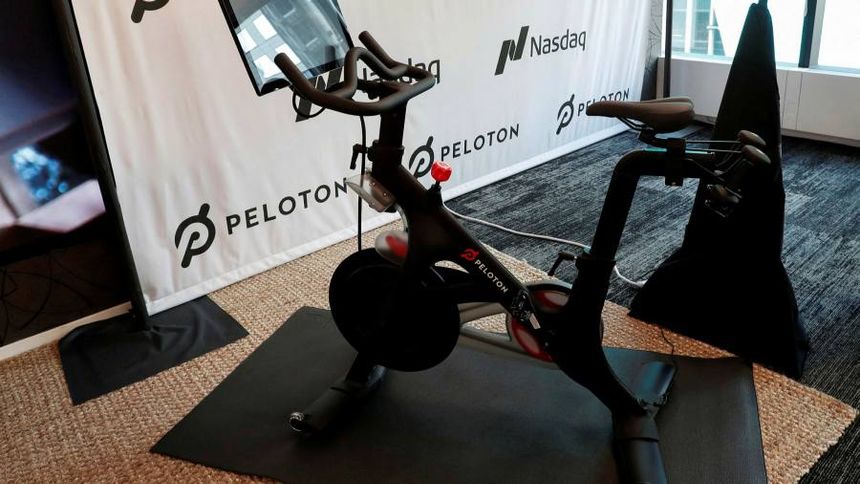 Old fashioned metrics such as "operating leverage" and "unit economics" are back in vogue!https://t.co/kARJ74T404

Spending money to grow is okay, but there needs to be clarity on when the unit economics will make sense or is there a path to making sense out of it. If there is, continue to spend & grow, if there isn't, cutting the burn & figuring out is the only way.https://t.co/bS8q0uDNNA