Tractable is placed in the forefront of strategies and technology deployments to transform not only claims management but the whole spectrum of repair network orchestration. The fact it is now a unicorn attests to the vital contribution Tractable and similar technology vendors make to insurers, brokers, repair networks and auto OEMs.

During the pandemic, insurers accelerated the use of automated tools to estimate repair costs. Garage operators say the numbers can be wildly inaccurate.

This shows the normal evolution of technology with the garage operator's and policy holder's complaints reflecting the gap between vendor hype and  deployable outcomes though Tractable takes a realistic approach to progress.

"Tractable, a company that uses computer vision and machine learning to build algorithms for insurance companies, says 25 percent of its estimates are so on-the-nose, they don’t need human intervention. The company wants to get that figure to 75 percent by the end of the year, says Alex Dalyac, Tractable’s CEO and cofounder. "

That is a far more realistic estimate than the 80% toted by some vendors even last year.

Much of the damage in serious collisions is hidden and as much a product of the  speed at collision, the point of impact and what the vehicle collided with whether another vehicle(s) or building/highway hardware. Whenever third parties are involved, no matter how effective the damage estimating software, the need for human intuition and investigation increases.

That is illustrated in the Wired article where conflict arises between tye insurer and the repairer.

“I'd say 99.9 percent of the estimates are incorrect. You can’t diagnose suspension damage or a bent wheel or frame misalignment from a photograph.”

“I'd say 99.9 percent of the estimates are incorrect,” says Jeff McDowell, who owns Leslie's Auto Body in Fords, New Jersey. “You can’t diagnose suspension damage or a bent wheel or frame misalignment from a photograph.”

Repair shop owners say they’re spending much more time haggling with insurance companies to determine the correct price for a repair—time for which they’re not compensated. In some cases, that means damaged vehicles are stuck in the shop for longer than usual.

Incomplete estimates can lead to incomplete repairs. Motorists sometimes bring their vehicles to Hernandez Collision Repair to make sure work done by other shops was done properly. The company’s two shops in southeast Georgia have seen more shoddy or incomplete work during the pandemic, says April Hernandez, whose family owns the business. She attributes the change to photo-based estimates and the AI that’s applied during the process. “I feel like it’s getting worse as time goes on,” she says."

This is compounded with newer vehicles installed with Level Three ADAS hardware and software ( more complicated still as it advances to levels 4 and 5).  Sensors have to be recalibrated to OEM standards to ensure the vehicle is both drivable and safe and it it is not where does liability lie? With the component vendors, the repair shop, the insurer or the OEM?

That points the way forward and the vital necessity for collaboration between insurers, auto OEMs, components OEMs and repair networks. It does not help when the auto manufacturer is battling to keep vehicles within its ecosystem of garages & repairers and the insurer is intent of leveraging its own authorised repair network.

"Dalyac, the Tractable CEO, says that he hopes the algorithms can evolve into agreed-upon standards that reduce disagreements between insurers and repairers. “We’ve got to make the process frictionless,” he says."

Agreed and measurable standards together with effective triage, collaboration and quality testing of repairs are vital for that to be achieved.

And all technology vendors agreeing to open interoperability to ensure data can be exchanged  between all parties in each ecosystem.  Algorithms, AI. machine and deep learning are all dependent on being able to access all the data.

The vision of the self-diagnosing car ordering the necessary parts and labour at the nearest certified repairer which will have 3D printed the parts by the time the triaged roadside assistance arrives and tows the vehicle to the repairer is a natural evolution.

But who will lead that evolution?

Disruption as in Netflix destroying Blockbuster is often applied to insurance and manufacturing. Just read the articles from Maarten Ectors ( former Chief Information Officer at Legal & General Group so he knows a thing or two about innovation, insurance and IS a disrupter). Read his articles on the automotive and insurance/finance worlds to make you think about strategy.

You might not agree with everything he predicts but you had better have a better answer if you are to survive and grow in the next five years.

Cars, drivers, passengers, auto OEMs and insurers, repair networks, the evolution of semi-autonomous and fully autonomous vehicles (AV) the transition from owning vehicles to leasing them and eventually to hiring robot taxis by the minute. The rate of change is both gradual and fast at the same time.

How did you go bankrupt?” Bill asked.

That will be the fate of those enterprises in the manufacturing, repair networks and insurance ecosystems that get their visions, strategies and deliverables wrong.

If you want to discuss how to avoid that fate why not start a discussion with me? Drop me a message on LinkedIn.

An AI company helping insurers with accident and disaster recovery has raised £43 million in Series D investment led by Insight Partners and Georgian.   Tractable, which has now raised a total of $115m, is now valued at $1 billion – making it the UK’s first computer vision unicorn. 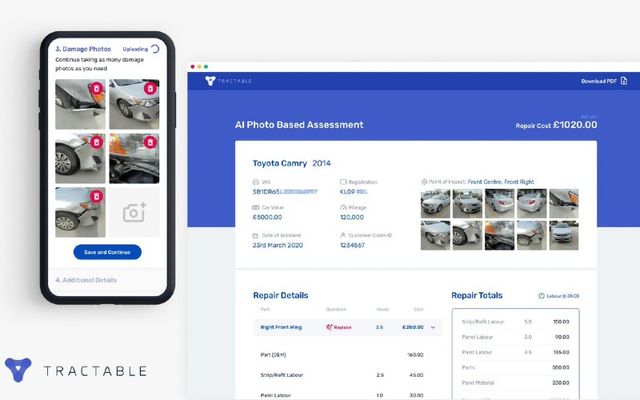 Auto insurance, digital maturity and how to transform it
Mike Daly