Is the Insurance world in the same position viz-a-viz AI? Loads of hype but the effective implementation down at the low-level machine-learning layer.

Nothing wrong with that. If Amazon makes so much impact in operations that it disrupts the whole retail industry worldwide there must be a lesson there.  A lesson for insurers particularly in the supply chain where 35% of costs are typically in waste materials and time.

Take another use case-Fraud. All too often touted as the ideal application for AI. Yet all too often motor insurers do not even analyse all the fields in a claims notification form whether digital or not. The simple ones yes- data of incident, names of policy holders and passengers.

But what about that unstructured data in the free text boxes?  I was on the forecourt of a petrol service station - the BP one on Knowle Hill outside Maidenhead, and the other driver reversed into me.

If the claim is fraudulent (whether the claimant or an incident engineered by the reversing driver) how will AI help see if this is part of a pattern? See if there is a pattern in the first case.

I ask the question as the only way it will is if this unstructured data is surfaced, joined with other data and analysed in the first place. It rarely is; insurers usually only access 10% to 20% of the data they collect. That is not a base for deploying AI.

Often, the incident is far too nuanced even for AI to detect; it takes the combination of human intuition ( grizzled, suspicious fraud investigators hardened in the world of opportunistic and planned fraud & human nature) and technology; AUGMENTED INTELLIGENCE as it is often called.

Once these patterns are suspected, technology can be used to test if this is the case and business rules & algorithms created and applied and fraud will be detected and avoided.

But that is not the automated AI hyped by many vendors. Professional fraud is planned to be unpredictable and to avoid the limited power of AI which is predicated on identifying predictable and repetitive patterns.

The insurer's comforting statement that they pay out on 98% or so of claims should be a warning to shareholders, bona fide claimants and the industry at large. Low value and simple claims are often processed this way; say damaged TVs at circa £650/$700 per claim.

Take 50,000 of those in which large insurers find that 35% are withdrawn by the claimant through a well planned self-service digital claims platform.

That is £11m/$14m of claims that would have been paid. But now withdrawn because the claimant suddenly see her claim story unravel as she describes the incident in a fully automated submission from the phone/tablet: -

Very effective, no costly AI involved, and gives the customer the chance to withdraw before it all gets serious.

Don't get me wrong. I am not decrying the value of AI. It's just that I see insurers and vendors trying to take a short-cut before they have the completeness of data to implement effective AI. And just as Amazon finds basic machine-learning rather than high-level AI more effective so can insurers.

They look to the glamour of AI and ignore more basic and effective application of technology. If you doubt Amazon so be it but Amazon's success is rooted in data and analysis. Data, data data. The unglamorous and vital platform of analytics, decision making and future AI applications. The often ignored critical success factor.

LexisNexis in its 2019 Future of Claims Report makes a well founded conclusion that AI will take 3 to 5 years to deploy effectively in transformed insurance.

Bear that in mind when you listen to the claims of AI vendors and consultants. And see where and how a potential disrupter of the insurance market, Amazon, leverages machine learning rather than high-flying AI.

But make sure that any digital claims platform is future-proofed for when AI does mature and deliver the value hyped today.

Yet whereas its fellow tech titans flaunt their AI prowess at every opportunity—Facebook’s facial-recognition software, Apple’s Siri digital assistant or Alphabet’s self-driving cars and master go player—Amazon has adopted a lower-key approach to machine learning. Yes, its Alexa competes with Siri and the company offers predictive services in its cloud. But the algorithms most critical to the company’s success are those it uses to constantly streamline its own operations. 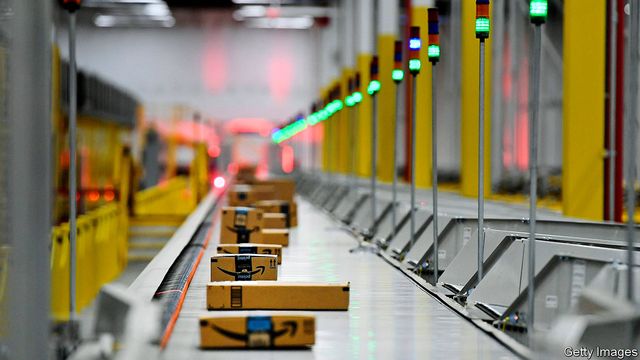 #AI The Economist | The learning machine https://t.co/GKr0ZCTIgj via @TheEconomist